On 25th of May 1924, the club commenced as the Elwood Sea Canoe Club, the first sea canoe club in Australia. The members built a club house in November that year for a fleet of sea canoes that competed in regattas as far away as Fairfield. A lack of transport saw competitors paddling to Port Melbourne and then up the Yarra to compete. In 1925, the seventy strong membership engaged in a round trip of Port Phillip bay (the largest inland waterway in Australia) during the Christmas period. Paddlers visited Pt. Cook, Geelong, Portalington, Queenscliff, Portsea, Sorrento, Dromana and Mornington.

The spirit of innovation

In the late 1920s, some of the club members were experimenting with fitting sails to their canoes. A rig with a main and a mizzenmast proved popular and earned the name, Batwing canoe. Some fitted lee boards to their standard canoes, but these were not particularly successful.

The first attempt at making a sailing ‘sea’ canoe was the ‘Chance’, a 16 foot long by 4 foot wide craft with large watertight bulkheads fore and aft, a bowsprit and a gunter mainsail. She inspired the “Seahorse Class” and the beginning of one-design yachting from Elwood Beach. 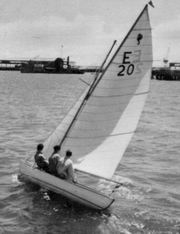 The Seahorse was an 18 foot double-ended, half- decked, bulkheaded yacht made to carry 135 square feet of sail (retaining the sliding gunter mainsail) and a strong crew of three or four men. The club was one of the first to insist on watertight bulkheads in every boat, which, in the Seahorse, represented two-thirds of its volume. When the club went on bay cruises, the fore and aft compartments were used for storing camping gear.

By 1934, with the Seahorse Class established, the emphasis changed from canoeing to sailing and this was officially recognised in the change of name to the Elwood Sailing Club. At holiday time the Seahorse could be found at most resorts from Geelong to Mornington.

The seahorse emblem, which had been adopted in the earliest years of the canoe club, was retained as the sailing club insignia. The emblem was reintroduced as a sail insignia in 1972 on the Elwood Junior catamaran – the second one-design yacht especially originated for Elwood Sailing Club.